Light after a month of darkness!

The intercom rang at my place. "Mummy, I am missing Aajoba!" wailed my daughter. Alarmed at her obvious distress and tears, I asked hurriedly "What happened?" "I miss grandpa and grandma. When will I get to see them?" sobbed my little one. "You will see them soon", I reassured her. Later I came to know that she got emotional after seeing her friend playing in the park with her grandfather and hence the distress call.

My dad (her Aajoba) has been in the hospital for last 4 weeks recovering from laryngectomy for throat cancer. Out of those 4 weeks he was in the ICU for a good 14 days struggling to draw enough oxygen into his body. Various health complications contributed to his extended stay in the ICU.

Harrowing, dark times for the entire family. During surgery, my dad's voice-box had to be removed due to which he could not speak. As a result, one of the family has been with him everyday of these 4 weeks - my mom, brother, sis-in-law, my hubby or myself. Kids are not allowed in hospital, never mind the ICU, so the kids have not seen their grandparents in a month now. Dad not being able to communicate, or eat/drink, meant there were very few visitors or other helpers.

Keeping up the morale for the kids, and stamina for the daily running of the home and work, was a juggling act for us all. I thought I had gotten away with it since my daughter did not seem overtly disturbed by our constant visits to the hospital or extended phone calls. But yesterday's call brought home the reality that children are sensitive to every minute change in the environment. They absorb everything and keep processing it in the background until one day the dam bursts.

The surgery wound took a long time to heal in my dad's case. The secretions from the wound escaped into his lungs and caused severe breathing complications for him. He had a couple of setbacks while recovering, infact he was on ventilator for a few days. All this almost collapsed my mother's health. However, she has rallied beautifully and has managed to withstand it all stoically.

Not being able to eat solids had made dad weak and he could barely sit up most of the days. It's been painful to watch one's parent so helpless and in pain. He kept asking for water and his beloved tea. Of course, he cannot ingest anything orally yet, but they kept him hydrated and fed though a pipe that goes through his nose into his oesophagus. I've had him shaved, rubbed his back which ached from all the lying down, wet his parched lips to give him the satisfaction of tasting water, wiped perspiration from his brow as he struggled to sit or walk, held his hand when he wrote on the slate (his way of communicating these last few weeks) that he is scared. I have gone over his daily vital stats with a fine tooth comb and grilled the doctors on his condition. Reminded me of all he had done for me when I was a child. How life comes a full circle!

Testing times test your mettle, they test the limits of your faith and strength of your relationships. Relationships are so fragile yet so resilient. A small diagnosis in a family member's life has such a cascading effect on all people connected to the family. Both my daughter and nephew's other grandmothers had to pitch in for babysitting so we could focus on the hospital duty. Colleagues at work had to take a share of our responsibilities, maids at home were diligent enough to never miss a day so we are not inconvenienced and neighbours took my daughter to her weekend class. But the most support and humanity came from the hospital staff - the nurses, mamas and mavshis who clean and provide for the patient day after day despite their rants and crankiness and still spare a kind word for the hapless relatives.

My dad gets discharged today. For him the wanvaas finally ends today. He will be able to take things orally soon and even speak with a device! These have been times of learning, introspection and gratitude..... 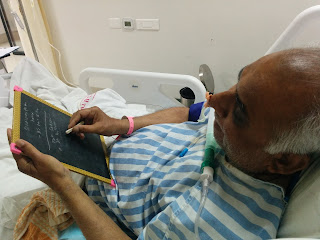 Social media during the Covid-19 lockdown